California State Senator Jeff Stone, PharmD to be Honored as 2019 PPSI Distinguished Person of the Year

California State Senator Jeff Stone, PharmD to be Honored as 2019 PPSI Distinguished Person of the Year

Pharmacists Planning Services, Inc. (PPSI) will present the 2019 Distinguished Person of the Year Award to California State Senator Jeff Stone in recognition of his support for the profession of pharmacy and public health advocacy.

Since 1975, the PPSI Distinguished Person of the Year Award has been awarded each year to an individual who has demonstrated commitment to pharmacy as an agent of change, educator, innovator, clinician, policy maker, or community activist. The 2019 award will be presented to Senator Stone on Sunday, April 14, 2019 at the 27th Annual William R. “Bill” Bacon Breakfast and Public Health Town Hall Meeting held in conjunction with the Western Pharmacy Exchange meeting in Los Angeles, California.

A 1981 graduate of the University of Southern California, where he earned his Doctor of Pharmacy degree, Senator Stone opened his first pharmacy in 1983 in Temecula, CA and today owns and operates Innovative Compounding Pharmacy. He has represented the 28th State Senate District since 2014.

While serving in the California legislature, Senator Stone has worked diligently to improve pharmacy-related offered services available to residents. In 2016, Stone teamed with a Democrat, Hannah-Beth Jackson of Santa Barbara, to co-author a drug takeback bill that went into effect in 2016. The legislation allows people to drop off unused pharmaceuticals in specially designed storage containers. He also has co-authored laws that make it tougher for juveniles to buy tobacco products. Senator Stone also supported AB 401 which expands pharmacy services to rural and underserved communities.

Stone sponsored a 2018 medication safety bill SB-1254 requiring hospital pharmacy staff to obtain an accurate medication history for every high-risk patient upon admission, which went into effect on January 1, 2019.

In the current legislative session, Stone has introduced SB-491 authorizing a pharmacy that provides compounding services to manufacture a nonpatient-specific dangerous drug for a general acute care hospital in order to help alleviate a commercial shortage of that drug and SB-446, which would provide that hypertension medication management services are a covered pharmacist service under the Medi-Cal program, as specified.

Stone has also introduced or sponsored legislation to include comprehensive medication management (CMM) services as a covered benefit under the Medi-Cal program, require coverage for services provided by an advanced practice pharmacist, in a Medi-Cal managed care plan, require general acute care hospitals to maintain minimum levels of pharmaceutical staff.

Senator Stone has been honored by the California Association for Nurse Practitioners as the 2017 Nurse Practitioner Advocate of the Year in recognition of his commitment to work with CANP on legislation that secures an NP’s role in providing medically assisted therapy to those struggling with opioid addiction.

More recently, Senator Stone was presented with the California Life Sciences Association’s 2018 Life Sciences Champion Award for his leadership in advancing policies that increase patient access and affordability, and boost R&D in biotechnology, biomedical science, pharmaceutical and medical device innovation in California during the past year.

PPSI thanks Senator Jeff Stone for his dedication and efforts to improve public health and access to clinical services through public policy. 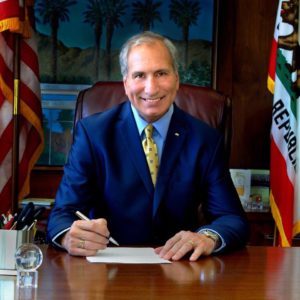 For more information on the William R. Bacon Breakfast and Public Health Town Hall Meeting or to make a reservation, click below. This breakfast is provided at no charge thanks to a generous donation from the Independent Pharmacists Association (IPA).